Recent reports place Tampa as one of the fastest growing cities in the nation. The migration is expected to have a positive effect on an already thriving economy, including favorable boosts in retail and new home construction.

Tampa is a gem on the West Coast of Florida. Recent plans to add to the already vibrant lifestyle, beautiful water views, great weather, abundance of outdoor activities, and thriving job market mean it’s only going to get better. 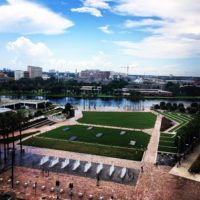 When it comes to entertainment, Tampa is unbeatable. You’ll want to explore the city, but with so many choices, we’re here to give you a sneak peak of some the best entertainment options in Tampa.

Are you a music lover? Tampa offers free concerts at downtown’s Curtis Hixon Park the first Thursday of every month. And if you’re looking for something bigger than local bands, Amalie Arena and the MIDFLORIDA Amphitheatre host the biggest musical acts in the country.

Feeling like some laughs? Head to the comedy club. Love the theater? See a Broadway show at the Straz Center for the Performing Arts. Are you a sports fan? No problem! Tampa is home to Buccaneers football, the Tampa Bay Lightning hockey team and soon the Tampa Bay Rays will be moving their stadium to the historic Ybor City neighborhood. 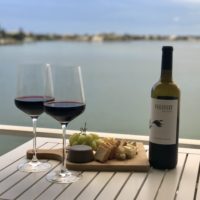 When it comes to dining, Tampa offers you a full gastronomic tour. Whether you are looking for casual or high-class restaturants, ethnic, trendy or vegan food, Tampa has it all. The city prides itself on some of it’s more famous restaurants like the historic Columbian Restaurant and Bern’s Steakhouse. Here you can taste the Columbia’s original 1905 Salad or indulge in a bottle of wine from one of the biggest wine collections in the world at Bern’s. You may even rub elbows with a celebrity or two. Top your night off with a tour through Bern’s wine cellar or relax to the sounds of live piano in the desert room. 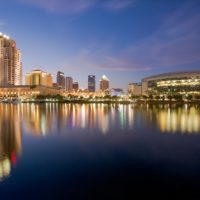 Tampa has some of the best scenic views on the West Coast of Florida and thousands of homes overlook the water. Rocky Point, Davis Island, and Harbor Island all offer homes with water views and boat docks. The downtown Tampa high rises afford breathtaking views of the surrounding area including Curtis Hixon Park on the river and the historic University of Tampa Campus. And the city makes it easy to enjoy all of the downtown river front attractions with access to the Riverwalk. 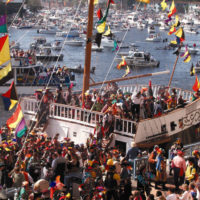 Except for July and August when Tampa experiences some of its hottest days, you can almost live outside. This is a city of people that love to be outside on the weekends, enjoying outdoor music, festivals or just dining outside by the river.

Once a year, Tampa puts on its famous Gasparilla parades, one for the kids and another for the adults. Hundreds of thousands of people attend each year to watch the invasion of Jose Gaspar. Gasparilla also includes a music festival with national acts and the Gasparilla 5k that attracts more than 14,000 runners.

If you’re wondering how to get outside during the week, the list is endless! Top things to do include a stroll on Bayshore Blvd., which is the longest continuous waterfront sidewalk in the world, a bike ride across the Courtney Campbell Bike Trail or a boat ride from the Tampa Convention Center.

For families with children, Tampa is paradise. Adults and kids alike will love Adventure Island where you can ride water slides, enjoy the lazy river, or relax on the beach with a cooler while the kids play.  Busch Gardens Theme Park has over 300 acres of attractions, from some of the most daring thrill rides to one of the country’s premier zoos, with more than 12,000 animals, live shows, restaurants, shops, and games. Florida residents can take advantage of affordable yearly passes that mean we visit these popular attractions often.

Feeling a little more adventurous? Try diving with the sharks in a safe environment at one of the best aquariums in the country, the Florida aquarium. For even more animal fun, head to the popular Lowry Park Zoo and watch the kids squeal with delight when they get to feed the giraffes. 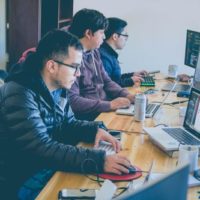 Tampa Bay is fortunate to enjoy one of the fastest growing job markets. In fact, Tampa-St.Petersburg lead the entire nation in job growth according to an August report by the Bureau of Labor Statistics. Maybe that’s why Tampa is listed as one of the top 10 Cities Americans are Moving to Right Now.

In September, the Bureau of Labor Statistics (BLS) reported that the Tampa unemployment rate dipped to 2.9 percent, significantly lower than the national average of 3.5 percent.

The highest in-demand profession in Tampa right now is software development. In fact, web developer positions in Tampa are expected to increase by 25 percent through 2024.

Notable employers in Tampa include:

With a thriving job market and economy, an abundance of affordable real estate, and an exciting, flourishing community, it’s no wonder so many people are ready to call Tampa home. Contact an experienced Tampa Realtor who can help you find the home of your dreams in the place the whole world is dreaming about. Or look for your Tampa Bay Home now.

Why do you need 4 point Inspection when buying a house in Florida?